PITTSBURGH (KDKA) — Whitney Houston had an impact on her fans.

The iconic pop star performed several times in the Pittsburgh area; and while she was here, she touched many lives. And for those she had more intimate contact with, the impact has lasted for years.

When Ebony McKinney of Stanton Heights heard “The Greatest Love Of All,” back in 1987, the only thing she wanted in the world was to meet Whitney Houston.

And the only people who could make that happen was the Make-A-Wish Foundation.

“I called the phone number and this woman answered the phone, and it turns out it was her mother,” Michele Atkins, the former director of Make-A-Wish. “And her mom said, ‘Whitney’s going to get some ice cream; wait a minute, let me to grab her.’ And Whitney came back in and got on the phone.”

Atkins said Houston couldn’t have been more gracious about the meeting and supporting McKinney. In fact after they met, they kept in touch.

“She was very giving, very real,” said Atkins. “I sometimes wondered if the reasons she had so many subsequent problems is she was so real.”

Houston made two Pittsburgh appearances, once at the Civic Arena and the second at Starlake Amphitheater.

Rich Engler produced and promoted both shows. He was impressed by both her personality and her talent.

“What a sweet lady,” Engler said of Houston. “She was just very sweet, down to earth, quiet, very quiet, very much to herself.”

He still has an official tour pass from when he met her. The pass didn’t really mean much then, but it means a lot now.

Looking back on her career and her voice, Engler thought it would have lasted a lot longer.

“Nothing like it; dynamic, powerful and range out the wazoo,” said Engler. “She blew it away at the Super Bowl, the anthem. It was… chills. Amazing.” 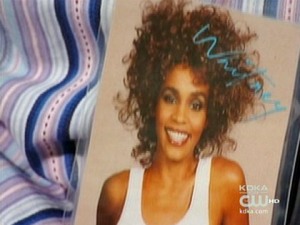