Sewickley resident Rich Engler recalls meeting Houston in the 1980s and again in the 1990s when his then-booking company Dicesare-Engler Productions brought her concerts to Pittsburgh.

The passing of legendary pop star Whitney Houston over the weekend stunned her fans and others whose lives were touched by the 48-year-old singer—among them a Sewickley concert and festival promoter.

Engler said Houston at the time was working with his former employee, Wade Perry, who traveled with Houston for years on every one of her shows from the mid-1980s until 2000.

Houston’s popularity was “red hot,” and her Pittsburgh show was a quick sell-out, Engler said.

“It was then that we first met,” Engler said. “I was able to go into the dressing room and talk to her. Later, I found out she didn’t really talk to anybody before or after the shows.”

Houston would, however, take the time to visit with record executives or people with ties to special causes, such as meeting young fans through the Make A Wish Foundation. Engler said she was “very into granting wishes.”

Perry bragged Engler up so much that Houston was amenable to meeting him, he said.

“We talked about Pittsburgh and how happy I was to do the show,” he said.

Engler said Houston was “very quiet and very much to herself.”

Houston’s crew had a day off, and she suggested putting together a softball game to compete against the DiCesare-Engler staff. Engler said they found an available pavilion in North Park, and he had caterers come out to do a barbecue, complete with hot dogs, hamburgers, chicken.

Engler’s wife, Cindy, and their two kids watched the game, which also attracted plenty of spectators.

“I don’t think they knew what they were watching,” he said. “The tour bus was pretty attractive. It was one of those very elaborate ones that was painted up in swirly, custom paint.”

Engler remembers Houston stayed on the tour bus the whole game, then came outside toward the end. She sat on the bench for a little while with her crew, he said.

“The crew was very protective of her so she didn’t get hit in the head with a hard ball. If she went down, that meant the whole tour would go down,” Engler said.

Houston eventually joined the game—and got a hit. A designated runner ran the bases for her.

“That was an enjoyable time,” Engler said.

The softball game in North Hills ended up being one of three worldwide that Houston played during her tour. The others were in Japan and Los Angeles.

“It was kind of special to spend that casual time,” he said. “She did tell me she enjoyed it immensely.”

Houston would later return to the Pittsburgh area for a second show on July 13, 1991 at what was then known as the Coca-Cola Star Lake Amphitheatre —now First Niagara Pavilion—in Burgettstown. She sold more than 170 million albums, singles and videos over her career.

Engler later watched from home in 1991 as Houston performed the Star Spangled Banner at the Super Bowl. Like many people, he said, he was in awe.

“I was totally blown away,” he said. “That rendition of the national anthem was just so phenomenal and powerful. She had the range that she had, it was absolutely amazing.

“No one’s ever repeated that,” he added. “It’s always good, but that was head and hands over everything.”

In the early 2000s, about the time she and Perry parted, Houston started having problems in her career and life. The singer had a high-profile, troubled marriage and eventual divorce from Bobby Brown and struggled with drug and alcohol addiction.

Engler said addiction and turbulent relationships do happen with superstars.

“It’s Hollywood,” Engler said. “It’s the music business and that’s sometimes how it is.”

Watching the memoriam segment Sunday night on the Grammy Awards, which honored Houston with a tribute, Engler said he recognized about a dozen other stars he and his wife knew who died over the past year. Among them were Pittsburgh native Frank DiLeo, Michael Jackson’s manager; E Street Band saxophonist Clarence Clemons; and longtime Grammy producer John Cossette. 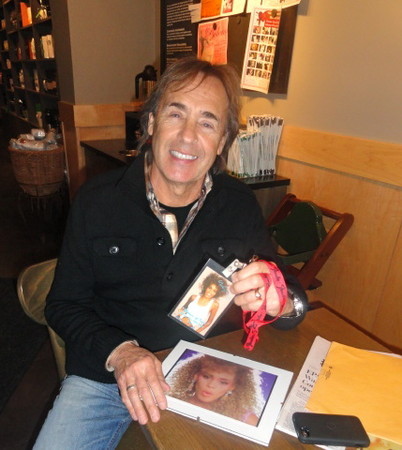