The Whitney Houston that most Pittsburghers knew was the Whitney who paraded across the screen — on MTV, movies and awards shows — or throughout the tabloids.

In the hours after her death at 48 on Saturday, she was heralded as one of the finest singers who ever lived by some people who know talent. Smokey Robinson called her “one of the greatest voices in the history of music.” Tony Bennett said, “Whitney Houston was the greatest singer I’ve ever heard … .”

But partly because she came of age in the MTV era and soared to the top so soon, her talent wasn’t nurtured like the classic singers before her, who spent years working crowds. She graced us with her presence only three times.

The daughter of gospel singer Cissy Houston, Whitney grew up singing in the church and could very well have been a child star, but her mom wisely held back. After a few sessions as a backup singer, she came under the wing of Arista founder Clive Davis and released her self-titled debut in 1985, charting with the singles “You Give Good Love” and “Saving All My Love for You.”

She made her first appearance in Pittsburgh on June 30, 1985, at the Syria Mosque, opening for Jeffrey Osborne. She opened with her cover of Pittsburgher George Benson’s “The Greatest Love of All” and did three duets with her brother, Gary Garland.

“I remember it so clear,” recalls David Shirey of Squirrel Hill. “We went to see Jeffrey Osborne, but Whitney stole the show. She was so youthful and gorgeous and classy. You could tell that she loved to sing, and the whole audience fed off of it. There was no AC in there, and it was so hot. Her neck was just glistening with sweat. She wiped her neck with a towel and tossed it in the crowd, and dudes were jumping for it — it was like a rugby scrum.”

By the middle of 1986, she was the No. 1 artist in the country and was embarking on The Greatest Love World Tour, which did not stop in Pittsburgh. Instead, she returned during the Moment of Truth tour on July 30, 1987, with Kenny G, coinciding with the release of her second album, “Whitney.”

It was the first concert in three years to draw more than 17,000 fans to the Civic Arena. I did the Post-Gazette review and wrote that “what Whitney didn’t do was go out and mesmerize the crowd.” The Pittsburgh Press headline read: “Whitney Houston un’event’ful.” It had nothing to do with her vocal ability, which was as formidable as we heard on record and MTV. She just wasn’t there yet as an entertainer.

The Press noted that people were walking out about midway through her set. She performed in the round, in a white suit, didn’t talk much to the audience and couldn’t interact naturally with the musicians, as they were on the floor below her. When she closed with “I Wanna Dance With Somebody (Who Loves Me),” she didn’t use the opportunity to actually bring somebody on stage and dance with them, as Bruce Springsteen had done in “Dancing in the Dark,” another popular video of the day as well as in concert.

Rich Engler, of the former DiCesare-Engler Productions, who promoted all three of her shows here, said, “I found out she was very private. She hardly ever met anyone before or after the show.”

But he did get a chance to say hello, and it went beyond that. “She was very polite, very quiet, couldn’t be nicer. She said, ‘We’re off tomorrow, what about a softball game?’ So, we put together a softball game in North Park — her and her crew against the D-E crew. She didn’t come out of the tour bus until the game was almost over. She came out and sat on the bench, and someone encouraged her to bat. They were very protective because if she got hurt, that was the end of the whole thing. She actually got a hit, but they had a designated runner for her on the bases.”

Throughout her early career, she was caught between bases, to some extent. There was some tension among fans and critics about the direction of her career. Was she a singer — or a pop star? Did she belong in theaters, where fans could soak in her vocals like they did with great divas such as Sarah Vaughan or Aretha Franklin? Or should she bounce around giant stages like Michael Jackson or Madonna?

The last time we saw Whitney in Pittsburgh was July 13, 1991, at the Star Lake Amphitheater, at which point she had opted for the full-blown MTV-style production. To begin with, it was a tough year for the concert industry, as the country was reeling in a post-Gulf War recession. A lot of tours were collapsing.

Whitney had roused the country with her stunning Super Bowl national anthem, just after releasing her third album, “I’m Your Baby Tonight.” The Star Lake show drew only 10,763, but the promoter said that was the biggest draw yet on her tour, which had started in March.

This time, she had state-of-the-art lighting designed by Marc Fisher (who did a Stones tour and Pink Floyd’s “Wall” show in Berlin), costume changes ranging from a glittery red jumpsuit to a silver gown, and choreographed dance numbers, which she took part in somewhat tentatively.

Again, both The Press and PG praised her vocals, especially on the ballads. The Press, however, noted that “she is not Ms. Warmth,” and the PG called it “a regimented performance that left little room for spontaneity.”

With that being one of her best shows on the tour, it’s strange that she never came back. In the early ’90s she married Bobby Brown and had a daughter, and her movie career started to take off. She launched the successful Bodyguard World Tour of arenas in 1993-94, but it didn’t come here, Mr. Engler says, either because the routing didn’t work or the guarantee was too high.

She had five songs on the “Bodyguard” soundtrack and three on the “Waiting to Exhale” soundtrack, but she went eight years between proper studio albums before releasing “My Love Is Your Love” in 1998.

The ’99 tour was a rare chance to see her back in theaters, with a more low-key, intimate production. Although it was a critical and financial success, a number of shows were canceled, and tabloids buzzed with drug rumors, which turned out to be true. Her most high profile moments of the ’00s involved talking with Diane Sawyer and Oprah Winfrey about those very addictions.

In 2009, she attempted another comeback with “I Look to You,” and everyone seemed to be in her corner. But, despite some positive reviews, the album didn’t take off, and she struggled with her hoarse vocals on a European tour. The voice just wasn’t there anymore, and she never came back for another tour of the States. That’s about where the story ends.

When the news hit Saturday evening, the world was shocked but not entirely surprised. “I was very, very sad about it,” Mr. Shirey says. “I remembered that night that I saw her at the Mosque — she was just so youthful and so joyful and had her whole life in front of her.” 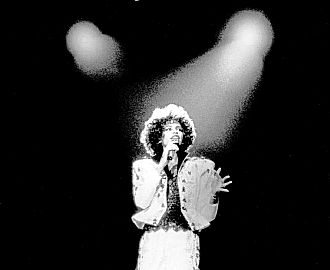