It has been almost 50 years since Richard Engler, former concert promoter with DiCesare-Engler Productions, lied about his ability to play the drums to get into a small combo band in his small hometown of Creighton.

Now 64, Engler, of Sewickley Heights, is taking the time to tell the story of how that lie eventually led him to a 40-year career in the music business and about the famous singers and bands he has promoted and befriended through the years. Engler, who hopes to have a book published about his career, got the chance to tell some of those stories at his two-day appearance as part of the Carnegie Science Center‘s exhibit, “Guitar: The Instrument that Rocked the World,” which runs through Sept. 30.

Having a vast collection of guitars autographed by such rock’n’ roll greats as the Rolling Stones, Engler exhibited 13 guitars at the science center.Engler said the Bob Dylan-played guitar he received in 1981, which is his favorite, was the first in his collection. Before then, he said he had never had any real desire to collect anything — not even autographed items.”Now, I wished I would have. A lot of people have come and gone,” he said.

When Engler asked Dylan if he could have the guitar, Dylan said “no” But he said if Engler would bring him another guitar, he would play it and sign it for him. That’s what started it all. Engler lived in Ross Township for 10 years before moving to Sewickley Heights with Cindy, his wife of 40 years, with whom he has two children and three grandchildren. They decided to move to the area in 1983 after Engler and Pat DiCesare sold the Stanley Theater, which they had bought in 1977.

The theater, now the Benedum Center, was named the No. 1 mid-size concert auditorium in the United States by Billboard Magazine in 1978. DiCesare-Engler Productions was named as the No. 2 production team for the same year. Billy Graham Presents was No. 1. While growing up in Creighton, Engler said many of his friends and family worked for nearby Pittsburgh Plate Glass Co., but not him.He started playing the trumpet in seventh grade but switched to the drums after telling members of a band called The Royals that he could play, which he couldn’t at the time.By the time the band played at a wedding two weeks later, Engler was able to follow the beat and did well with borrowed sticks and “rinky- dink” bongo drums.”

We made $25 a guy. I thought, ‘Can you believe it? I made this money doing something I really enjoy.'”Eventually, Engler took over the group, because he said he was good at getting bookings for and promoting the band. The band kept going and eventually was named Grains of Sand.

Engler studied art at Youngstown State University and Carnegie Mellon University but left to become a concert promoter and music producer.His first concert was a free one featuring five tri-state bands at Flagstaff Hill in Schenley Park in 1969.In 1974, he partnered with DiCesare and received many awards for his contributions to singers’ and bands’ careers.

When DiCesare-Engler was sold in 1998, Engler stayed with the company until 2004. He now works for Targe Energy LLC in Pittsburgh. Engler has met a myriad of performers over the years, including Chris Martin of Coldplay. In 2003 or 2004, while working with the band, he had intended to talk to the members backstage, but they already had left.Instead, he said, he was lucky enough to meet and have a conversation with actress Gwyneth Paltrow, who was Chris Martin’s girlfriend at the time.”

We talked about touring with the band. She said it was quite an experience and different than the movie business. I should have asked her to sign the guitar,” he said.The band eventually came back, and Martin played his guitar and signed it for Engler. Engler said he also has guitars autographed by Bo Diddley, who, he said was one of the “architects of rock’n’ roll.”

He kept the Diddley guitar with him at the exhibit and brought it out only periodically to tell a story about the singer. Diddley, who played on the Ed Sullivan Show in 1955, was banned from ever playing on the show again after Sullivan asked him to play a song by Tennessee Ernie Ford, but instead the singer sang “Bo Diddley,” and the crowd went wild, Engler said.”

He told Ed Sullivan he wouldn’t need to come back to the show, and said, ‘Did you see the reaction of that crowd?'” During his years in the music business, Engler brought Diddley to play in Pittsburgh several times and the singer gave him a signed guitar in 1993. For those who missed Engler’s appearance at the Carnegie Science Center, he said he will have another show in the fall but isn’t sure of the date or venue yet. He also has signed with a literary agent who is working on finding a publisher for his book, which took Engler two years to prepare and about a year to write, he said. There isn’t much in the book about the guitars, maybe one or two stories, he said, including the Dylan story.”

It’s a little about me, but mostly about who did what, where, when and how,” he said. 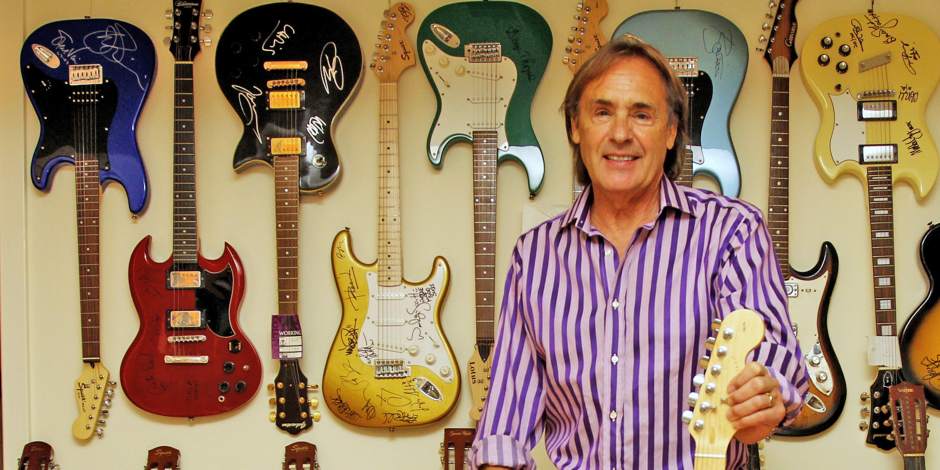